Warren Buffett’s Berkshire Hathaway is buying Media General’s newspapers, which means that the Daily Progress is changing hands. It was 1995 when Media General Bought the now-120-year-old newspaper from Worrell Enterprises, a local, family-owned business, and by most measures, the newspaper has not fared well since. The entire print journalism industry has been in a slump since advertising dollars began moving online a decade ago. It’s not clear what the future financial model will be for local journalism, and the whole industry seems to be waiting for somebody to swoop in and figure it out. Berkshire Hathaway—technically, BH Media Group—is buying 63 newspapers for $142M.

Buffett already owns a few newspapers, including the Buffalo News and the recently purchased Omaha World-Herald, and owns the largest share of the Washington Post. Buffett has said that he sees newspapers’ value as a community hub, and that their most valuable function is providing information that isn’t available elsewhere, something that many newspapers—including the Progress—have been struggling with. He’s also said that it’s a mistake for newspapers to give away so much material online for free.

What all of this will mean for the Progress remains to be seen, but it’s a fair guess that this is good news. Media General has basically been supervising a slow collapse of their print properties, with no apparent ability to arrest or reverse that collapse. Buffett is perhaps the deepest of deep-pocketed investments out there, known for shrewd, long-term, community-focused thinking. The future of the Progress is looking a lot brighter.

Media General is planning for a post-newspaper business model, Richard Craver writes for the Winston-Salem Journal. The media giant—andDaily Progress owner—has made it known that all of their newspapers are for sale, and a recent regulatory filing forecasts revenues premised on the assumption that they’ll strip the company down to its television stations and electronic media components. Media General claims that multiple parties have expressed interest in purchasing their newspapers. They’ve said that they’re interested in selling all of the properties off together, or individually, meaning that it’s possible that another big media company could take ownership of the Progress, but it’s also within the realm of possibility that somebody local could buy it.

Media General purchased the Daily Progress from the Worrell family in 1995, along with the rest of the Charlottesville-area family’s Virginia newspaper properties.

Progress owner Media General is having a hard time paying its debt. 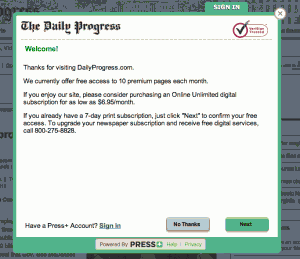 Media General has put up a paywall in front of Daily Progress website content. The media conglomerate entered into a relationship with Journalism Online earlier this year, the company that has developed the “Press+” platform. It limits readers to reading ten “premium” articles each month (no word on what constitutes “premium”) before they have to buy an online subscription, which runs $7/month.

I was an early alpha tester for the then-unnamed Press+ a couple of years ago, when I worked for a magazine, but after reviewing the meager and misguided technical documentation for their product, decided Press+ was much too crude to work. Simply blocking the URL http://s.ppjol.net/pp.js in a program like Ad Block Plus, or running a browser in “private” or “incognito” mode when visiting an Press+ affiliate, are enough to prevent it from working entirely. The whole article is sent to the browser along with the payment requirement—a bit of code is simply used to display a little box above it; suppress the box, which is easily done, and you can read the article.

It’s also based on a model of charging a monthly fee per media outlet, which isn’t how many people read news now—in the Google News era, we sample our news from a great many sources, and are reluctant to commit financially to a media outlet like that. Instead, media outlets need to be charging micropayments on a per-read basis, anywhere from 1–25¢ per article, for which we’d all have a single monthly charge on our credit card. But to work, those need to be aggregated across dozens or hundreds of media outlets, and only an existing online retailer with a huge file of credit card numbers could make that work, which really means Amazon or Apple. (Google is trying this with One Pass, but they just don’t have an existing financial relationship with enough people.) Until that happens, companies like Media General are stuck with solutions like Press+, which a lot of industry experts are dubious will pay off. Media outlets eager to find new sources of revenue to replace sagging print subscription income are understandably flirting with the Press+ model, because what other options do they have?

This obviously leaves me in an awkward position for linking to news from here, since I’d routinely be sending people to articles they may well not be able to read. Luckily, a few alternatives are available. The first is to link to original stories on Charlottesville Tomorrow, which not infrequently is the ultimate source of the sort of Progress stories I tend to write about here. The second is to link to coverage on NBC-29 and CBS-19, which frequently gets their daily headlines from the Progress. While that’s really not fair to the Progress reporters, that does have the benefit of being a useful link. And the third alternative is to summarize stories in more detail, so that folks who cannot click through can still get the gist of the article. This is, again, not really fair to reporters. I’m open to suggestions here!