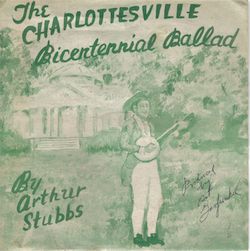 47 thoughts on ““The Charlottesville Bicentennial Ballad””