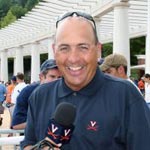 Mac McDonald has quit his gig as the radio announcer for the Cavaliers, effective yesterday, NBC 29 reports. It seems like it was just yesterday that he came back from last time he quit — he left the job in 1985, returning in 1996. The football and basketball announcer says he wants to “pursue other opportunities.” He’s long been billed as “the voice of the Cavaliers,” a clever form of job insurance that presumably leaves CBS Collegiate Sports Properties in a tight spot. For more information, see the company’s press release.