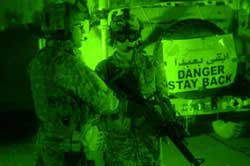 Fargo on right. Photo by “darkblueworld” on Military.com

Twenty-two year-old Adam Fargo, of Ruckersville, was killed by an IED in Baghdad yesterday morning, Liesel Nowak reports in today’s Daily Progress. The 101st Airborne medic was with a platoon responsible for keeping the route clear of IEDs. His vehicle hit an IED, killing Fargo and seriously injuring others.

Fargo’s death is the second of local boys, the first being Bradley Arms’ 2004 death in Fallujah. The war hit home again this May, when UVa graduate Kimberly Dozier was seriously injured in an IED attack.