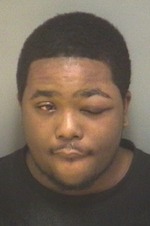 Nineteen-year-old Jamel Tucker broke into the wrong house. Michael Brown, of Charlottesville, woke up to his wife screaming from the living room, where she’d found Tucker attempting to steal their flat-screen TV. Brown, who has three teenaged sons and a 150-pound Great Dane, decided that it was him or Tucker. Demure coverage says that Brown “subdued” the burglar, but Tucker’s mugshot really says it all. Tucker was taken the hospital before being booked at the jail.

3 thoughts on “Burglar “Sudued” Straight into the ER”