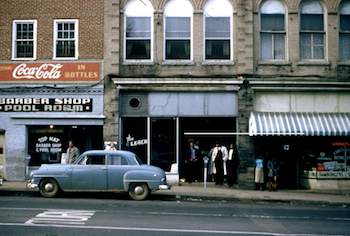 A UVA project has virtually recreated Vinegar Hill in its heyday, the university writes in a press release. (If you’re not from here: Vinegar Hill was a large, mostly black neighborhood around the McIntire/Main intersection that was demolished by the city for “urban renewal.” The city relocated people from their own homes into public housing.) Undergraduates researched archival records to look at who owned property, when and how it changed hands, what it was appraised for, where people went after they lost their homes, and lots of similar information, combining it all into a series of visualizations fronted by a website called The Vinegar Hill Project. I’ve spent a while exploring this website, and it’s just a treasure trove of data, veritable infoporn for local history buffs. Set aside an hour to pore over this site.

It’s a shame that the historical society is too stuffy to do this kind of thing. They prohibited their last executive director from blogging.