From a city press release: 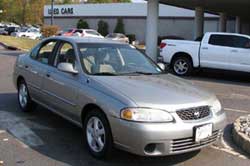 On 11-09-07 at approximately 14:46 hrs the Charlottesville Police Department responded to 807 St. Clair Avenue for a report of a suspicious death. Upon arrival police found the victim Jayne Warren McGowan, a 26 year old University of Virginia graduate dead in her living room. The victim was apparently shot and died as a result of the gunshot wound. Police are currently looking for the victim’s vehicle which apparently was taken from the residence. The vehicle is a Nissan Sentra, with Virginia license AED-2522 and is gold in color. If you see this vehicle, do not approach the occupants who should be considered armed and dangerous and call 911 immediately. Anyone with information about this case should call Detective Mooney or crime stoppers at 977-4000.

When murders happen in the area, it’s almost always a dispute between friends, family members, or drug-related; they’re not random, and they’re tough for police to prevent. But when somebody is found dead under these circumstances, that’s a different sort of a crime entirely.

Note that the photo is of a Nissan Sentra, not the Sentra in question.