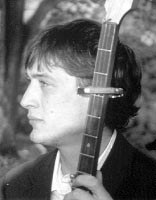 Phillip Allen Gianniny died on Saturday at the age of 31. Phil, a former member of The Hogwaller Ramblers and The Hackensaw Boys, was perhaps best known to Charlottesvillians for playing banjo on the Downtown Mall. He could be an ornery cuss; Phil was kicked out of just about every bar in Charlottesville, at one time or another. But he could also be a sweet guy, and he was a hell of a musician. Substance abuse made his path in life a rocky one, but he’ll be missed just the same.