Jocelyn writes to describe a developing kerfuffle. You’ll recall that two Hollymead Elementary students tried to distribute fliers to their class to promote their church’s vacation bible school by way of the schools’ “backpack mail” process, used to send information home to kids’ parents. They weren’t allowed to, because of the schools’ prohibition on sending home “partisan, sectarian, religious, or political” fliers. The kids’ father got Jerry Falwell to go after the county, and the school board agreed to let religious groups distribute materials through the system. (See Lisa Provence’s September 28 coverage of this in The Hook for a more detailed recap.) It was at this point that I thought “oh, damn, no they didn’t.” How long until Satanists exercise their right to send literature home with the kiddies?

Americans United for Separation of Church and State writes about the inevitable result:

Some local Pagans who attend Thomas Jefferson Memorial Church, a Unitarian-Universalist congregation in Charlottesville, decided to take advantage of the new forum as well. They created a one-page flier advertising a Dec. 9 event celebrating the December holidays with a Pagan twist and used the backpack system to invite the entire school community. 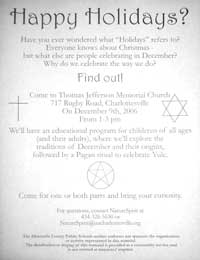 One local (Christian) blogger, Cathy, is upset — on the one hand, she says she wants the kids to learn more about Christmas in school, but on the other hand, she’s furious about the flier, believing that pagan rituals are inferior to her religion’s rituals and inappropriate for children. She vows that she “will not step aside.”

On the other hand, local blogger Jeff Riddle — the pastor of Jefferson Park Baptist Church — points out that this is simply what comes of breaking down the church and state wall…but then calls for Christians to leave public schools.

This is why we don’t mingle religion and government. It’s bad for government, yes, but it’s worse still for religion. Cathy doesn’t want her kids exposed to paganism, just as some parents don’t want their kids exposed to Christianity. Here’s hoping that the school board will rescind this policy. Or they could just wait for Falwell to demand that they rescind it, but why wait?

By the way, the event is at the Thomas Jefferson Memorial Church on Saturday from 1-3pm. It actually looks pretty interesting.

12/07: Lisa Provence writes about this in the current Hook.