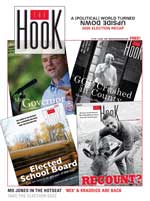 In their first issue about last week’s elections, The Hook has provided a clever cover this week. Instead of having their usual one featured story, there are four potential covers pictured: one featuring Governor Elect Tim Kaine, one featuring Supervisor Elect David Slutzky, one featuring the elected school board, and one featuring Sen. Creigh Deeds. It had never really crossed my mind that they have to settle on one their one cover story will be, or that they might mock up multiple candidates each time. This approach provides a great look both at how the media can shape the news and how they do what they do.